Posted on April 4 2019 at 11:39
Survivor Esme Johnson recently published an open letter on Twitter in 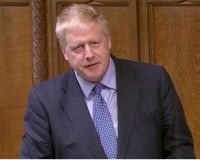 response to comments made by Boris Johnson about investigations into historic cases of child sexual abuse.

Rape Crisis Scotland is grateful for her permission to reproduce here a slightly abridged version of her powerful message.

[*Content warning for explicit references to acts of sexual violence]

It’s been a few weeks now since your illuminating interview on LBC Radio.

I thought it better to wait to respond until I was able to use inoffensive language. It’s a shame that you did not similarly take a moment’s pause to do the same before that interview.

I’ve also had to recover a little because your words were extremely harmful - to me individually, and I have no doubt to many others. Truth be told, they actually knocked me for six.

Why? Well, at a point in my recovery where I have been rejoicing that at long last people in public office, with social power and the potential to make change are starting to listen and willing to act, you arrive, and shout very loudly that no, actually, listening to survivors, dealing with historic abuse cases and bringing perpetrators of sexual violence to justice is a complete waste of time and money.

Just when I had been celebrating the IICSA (Independent Inquiry into Child Sexual Abuse) project (to whom I gave a statement) and their desire to hear our stories and use these to protect our children, you try and put me and my fellow survivors in our place by reminding us that what happened should stay very firmly in the past.

We survivors would also dearly love to have consigned our miserable histories to the past - not to have them in our present or our futures, but that is just not how it works.

I would like to let you in on a secret (I have been pretty good at keeping secrets over the years).
For survivors, the offences never become historic. Childhood trauma wants to worm its way into everything we try and do in order to survive and move on. It torments us with images that a child should never see. It wakes us up at night, it intrudes on our days. It demands to be heard and when we try not to listen (because quite frankly we’d rather just get on with living), it squeezes our souls until we have no choice but to look at it and believe it and feel that pain all over again. It doesn’t matter how long ago it was – if it has never been acknowledged and our experience validated, it remains the heaviest of secrets that we drag around with us every single day and it is anything but historic. It may be like a medieval ball and chain but it is contemporary and real and very, very heavy.

Just for clarity, let me tell you what the ‘malarkey’ of my sexual abuse experiences look like. For the sake of brevity, I will just give you the bare outline.

This is what my ‘money wasting’ history looks like:

• Humiliated and penetrated with objects by a group of adolescents who entertained themselves by simulating sex on me using a candle.

• At 14 years a family member started molesting me and after a year he decided it was time to rape me.

Those events were over 40 years ago. That may seem historic to some. But to me they have transcended all concepts of time.

Those events of the past created a lifetime of mental health struggles.

I have deftly kept most of my struggles behind closed doors and not squandered public money on accessing services - the enduring fear of the stigma attached to mental health difficulties and especially to matters such as self-harm and suicidal ideation, has kept me well away from state providers.

Instead, I have paid out thousands on getting private help. And more than anything I have turned to Rape Crisis for the expert, free and empowering help they offer. I know that must also be a source of great relief to you because, as I’m sure you know, Rape Crisis are not considered worthy of appropriate provision of government funding and therefore are really not a drain on your coffers. Luckily for you, their personnel numbers are maintained by volunteers who cost you absolutely nothing.

I have done my bit for society too. I’ve contributed and participated and endeavoured to make sure my life has been one of value to others. I’ve committed my working life to the NHS and to other caring professions. My raison d’etre has been to help others. To do no harm. To make sure I play whatever small part I can to ensure that those in need and asking for help receive it and that my interaction with them makes a difference.

I’ve paid in far more than I have taken out.

I was also deeply saddened to hear that you feel obtaining justice for violent crime is a waste of money (sorry – I mean an ejaculation stain on the wall).

I do not share your financial anxiety. After 20 years locked in psychological turmoil following the abuse, I found my voice and I realised that I needed to shout out because the toxic waste created by the burden of a deeply held dark secret was poisoning me from within. I had the audacity to speak up about something that was potentially going to be an ‘awful waste of money’.

And when I did - I discovered that not only had that family member abused and raped me, he had done the same to his children. And, 20 years on from raping me – very much in the present – he had made a start on his 5-year-old grandchild. If only I had known I was going to open up a can of worms I could have stopped there and warned the government to take out a bit of a loan.

I’ve never been great with money so instead I decided that stopping a paedophile in his tracks, protecting a five-year-old from further harm and gaining justice for those of us that he had already harmed was worth every damned penny.

‘What on earth is that going to do to protect the public now?’ you ask.

Well, in my case, it stopped a predatory serial paedophile from going on to abuse and rape his 5-year-old grandchild. And who knows how many others he had already started on? There was nothing historic about his offending. He had been doing it for over 20 years, was still doing it and I have absolutely no doubt that he will still be up to his old tricks.

Thank heavens he was convicted and spent a little time At Her Majesty’s Pleasure. Luckily in terms of your budget it was only for 2 and a half years.

He was actually sentenced to 9 years but I guess in the interests of saving money, the system works well to ensure you can cut back here and there.

I’m afraid - this may hurt a little, that some money was wasted during the investigation and trial. Despite my best efforts, and the provision of the name and place of work of a key witness who could confirm that I told her of the rape when I was 15 years old, the police did not feel it merited making contact with her. That first trial resulted in a hung jury and an awful lot of money had to be spent on trying again. Luckily, I saved the police a job, and with a bit of time and money I tracked that witness down and handed her name, address and phone number to the investigating officer. That witness did the decent thing and provided a statement to the court. The prosecution barrister confirmed that her evidence was crucial to getting the guilty verdict. If only we had that first-time round – we could have saved a bob or two.

I would dearly love to sign my real name here. I have no desire to be anonymous or to hide and it is not an indication of shame.

I have one reason and one reason only and that is to protect my young daughter. She does not know my history and as her mother it is my loving duty to protect her - to make sure she does not hear, see or experience anything that she is not mature enough to receive. I will not risk harming her by foisting sexual matters on her before she is ready and that she has not given me consent to share. Because that’s what all responsible parents and adults do, right?

Unless of course one is a paedophile.

I look forward to hearing from you.

Not a money waster