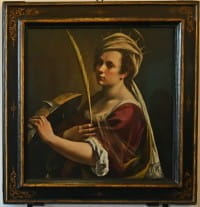 temporary residence in one of its most treasured institutions, bringing together as she did so the culture of 17th century Italy with contemporary Scotland.

Since her painting ‘Self-portrait as St Catherine of Alexandria’ went on display last Wednesday, Artemisia Gentileschi has cast her quiet glance over the many visitors who have stopped by the Glasgow Women’s Library to see what all the fuss is about, and has generated many discussions about the significance of that glance, and much else.

Responses to art are always subjective & tastes do change, but there is something eternal and universal in the themes this great Baroque artist explored, repeatedly, in her work – some of which remain, sadly, all too familiar in 21st century Scotland, and resonate as powerfully here today, as they did in Italy 400 years ago.

In so many respects, Artemisia’s story, and her creative framings of aspects of that story reflect the constrictions, limitations and brutal injustices imposed by a patriarchal society in its efforts to keep women in line and many of these factors continue to frustrate progress towards equality and justice for sexual violence.

As someone who was raped at the age of 17 by a friend and collaborator of her father, this was something Artemisia knew a great deal about.

This devastating event, and the subsequent trial, not only cast a long shadow over her life, but for a very long time obscured her reputation as an accomplished artist whose work explored repeatedly the abuse and iniquitous treatment of women, and their efforts to resist this and retain autonomy and control. ‘Self-portrait as St Catherine of Alexandria’, which was purchased last year by the National Gallery (and with its installation at GWL has begun a tour of smaller venues across the UK), is an outstanding and a very personal example.

The scrutiny of women’s behaviour in the context of rape – the notion of the ‘deserving’ victim and unblemished reputations as a prerequisite for a proper hearing, are in many respects as familiar barriers to justice for survivors today as they were to Artemisia. Her initial efforts to subsume the violation into acceptable convention by continuing a sexual relationship with her rapist (on the understanding that he would marry her) will be familiar to many women who have felt unable to escape abusive relationships through fear, family alienation, cultural or other pressures.

It was only when the man who raped her, Agostino Tassi, reneged on his promise to marry her (and thereby ‘legitimise’ - in the eyes of 17th century Italy - the assault), that charges of rape were brought against him – not by Artemisia, but by her father. Even then, it was only because she was a virgin that the trial happened at all – it was far more about protecting her family’s honour – her father’s name – than it was about securing justice for her.

The trial lasted 7 months, and Artemisia was tortured with thumbscrews in the course of it in order to ‘verify’ her evidence. The use of instruments of torture may sound like a brutal relic, yet echoes of the excruciating impact rape trials can have can still be heard in descriptions we hear from complainers today, many of whom have described the experience of being cross-examined as an ‘ordeal’ – even, in some cases, saying even that it was worse than the rape itself. Casting doubt on the credibility and veracity of women is still, far too often, the approach of choice in a justice system which so often seems far less willing to scrutinise the motivations and behaviour of perpetrators than to speculate on a woman’s reputation, sobriety, sexual behaviour, dress, and a myriad of other random irrelevancies.

Happily, parallels with the 17th century do not end there, and there are many powerful and familiar positives to take from Artemisia’s story. While her work depicts the abuse and violence she and many of her contemporaries endured, what she also demonstrates in her painting – and the self-portrait on display at GWL is a wonderful example – is that in herself and through her work, she transcends all of it.

With her skill, through her themes, and in the directness of her uncompromising gaze we can hear the words with which she herself responded to those who doubted her: ‘As long as I live I will have control over my being’.

In casting herself as the persecuted Christian martyr St Catherine, Artemisia reinforces the idea of transcending extremes of torture, and violence – even death. In placing her assured hand on the spiked wheel that the Emperor Maxentius had intended should break St Catherine – but which shattered as soon as she touched it, Artemisia shows us in her painting the power and resilience of survivors.

She and no one else, she seems to assure us, is the one who will shape her destiny and reputation.

Rape Crisis centres in Scotland see Artemisia’s successors in the thousands of people who seek support from them every year. Survivors of sexual violence find so many different ways to cope with and move beyond what they have been through, and demonstrate enormous courage and strength in a million different ways. Contemporary incarnations of Artemisia’s resilience and determination – of her insistence that her message will be communicated on her terms can be seen in Miss M, in Speak Out Survivors – in Finlay McFarlane and in Nadine Harkness and the thousands of others who take one step further from someone else’s violence every day and know that the only truth that matters is their own.

Artemisia Gentileschi ‘Self-portrait as St Catherine of Alexandria’ is on display at the Glasgow Women’s Library, Landressy St, Bridgeton, until 19th March

What a fantastic , thought provoking piece. And very emotional to read your admiration for the people you support. Your strength and intellect as an organisation does not go unnoticed by us survivors who have come to you for help and your collective voice helps to give our individual voices strength. Thank you.