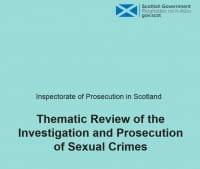 Rape Crisis Scotland have today condemned the ‘unacceptable’ findings of a review into the Investigation and Prosecution of Sexual Crimes released by the Inspectorate of Prosecution in Scotland. Survivors’ voices contained within the report recount the trauma, degradation and humiliation of the court system, with one survivor describing the process as ‘worse than being raped’. Rape Crisis say that the report must act as an urgent wake up call, highlighting the critical need for improvement in legal responses to rape in Scotland.

“I was not prepared.... it was the most degrading and terrifying thing.”

“In our court system, you are totally humiliated. It was the most degrading experience I have been through”.

“Court was absolutely horrendous, it was worse than being raped”.

“Although there was a guilty verdict, I would never go through it again.”

In addition to the overall dissatisfaction from rape complainers highlighted in the quotes above and damning feedback, the report details specific areas of concern. These include:

· Considerable and long delays in the progression of cases, in particular in pre-petition cases;

· Significant and concerning gaps in communication; in one case it took 15 months from the police report for the Crown to contact the complainer;

· Poor standards of communication from the Crown Office and Procurator Fiscal Service in pre-petition cases with almost half of cases being below the standard expected;

· Significant proportions (12%) of sexual offence complainers withdrawing from the process.

“This report raises serious concerns about justice responses to rape. For a survivor to describe the process of seeking justice as being worse than being raped is a statement that should concern us all. What women are telling us is that their experience of the justice process, and particularly of giving evidence in court, is so traumatic that even in cases where there is a conviction, the cost of getting justice was too high. This is in no way acceptable.”

“We acknowledge efforts by Crown to improve communication and the overall prosecution process. There are many dedicated staff working within COPFS who are committed to providing a high quality service to victims and witnesses. It remains the case, however, that the system overall is retraumatising rape complainers to an unacceptable degree.”

“Not only is the current system retraumatising rape complainers, but it is not getting the best evidence. If you were to design a system to get the worst evidence from rape complainers, it would be the current system. Trials frequently take place up to two years after someone reports to the police. Court dates are changed frequently, with complainers building themselves up to give what is very difficult evidence only to be told the night before that it isn’t going ahead. This can happen many times. Sometimes even the city the court case is going ahead in can be changed at short notice.”

“We have had two decades of rape reform in Scotland, yet still women describe the experience of seeking justice as bad or worse than being raped. If we are to improve confidence in Scottish justice responses to rape then it is time to stop tinkering around the edges and commit to radical changes. Rape complainers deserve better.”

The report has sparked renewed calls from Rape Crisis Scotland for the implementation of the Evidence and Procedure review, in particular a move to video record rape complainers evidence, including the defence cross examination, close to the incident/s to avoid them having to give evidence in court.

The report contains a number of cases studies, notably on pages 53 & 67, which illustrate the need for change.

This press release is available to download as a pdf below