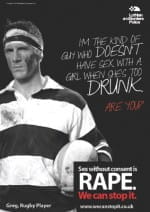 The “We can stop it” campaign is being led by the Association of Chief Police Officers in Scotland (ACPOS) and highlights a recent shift in the law.

The Sexual Offences (Scotland) Act 2009 reformed previous legislation for sexual offences, broadening the definition of rape and creating a range of new offences. The Act also defined consent in statute for the first time, and outlined a range of circumstances in which consent cannot be considered to be present, including when a victim is asleep or unconscious, or intoxicated through alcohol or other substances. Also for the first time under the new Act, is the possibility for male victims to bring charges of rape.

The new campaign aims to raise awareness of these aspects of the law, all of which are highlighted through a series of strong, thought-provoking statements and visuals from men acting as positive role models.

With the tagline “We can stop it”, the campaign invites people, and in particular young men between 18 to 27 years old, to consider their own attitudes and behaviour and the role they can play in preventing rape.

The posters and vinyls will be displayed in areas popular with young men and women, including pubs and clubs.

A thirty-second advert has also been produced for use on the specially designed website (www.wecanstopit.co.uk) and on YouTube. The second phase of the campaign will feature online advertising on a variety of sites most commonly used by the target audience.

The campaign was conceived after consultation with partner organisations, academics and focus group research with young men and women across the country. Feedback from the groups highlighted that previous campaigns on the subject were often victim-focused, or targeted men as perpetrators. “We can stop it” is designed to be a positive and proactive campaign which seeks to promote a sense of responsibility rather than attributing blame.

Assistant Chief Constable Graham Sinclair, the ACPOS lead for Public Protection, said: “Reducing incidents of rape and sexual assault is a priority for all Scottish forces and education plays a huge part in this. It is vitally important that the changes in legislation are promoted, and I am delighted that this campaign is launching today.

The tone and language of the campaign marks a significant shift in approach to raising awareness of sexual offences legislation, and I hope that it will help remind men that they are in complete control of their behaviour.”

Lord Advocate Frank Mulholland said: "I am delighted to have the opportunity to express my support for the campaign.

"It is important that the public are aware of what rape is and the campaign will help in raising public awareness on this as well as dispelling any myths about rape. There is no concept of contributory negligence in the crime of rape. Rape is rape."

"There is no concept of contributory negligence in the crime of rape. Rape is rape."

Cabinet Secretary for Justice Kenny MacAskill said: "Rape is a horrific crime and this campaign, led by ACPOS, has my full backing because we need to change attitudes and educate the next generation. This campaign also sends out the message loud and clear to perpetrators that any instance of rape is completely unacceptable and will not be tolerated.

"This Government has strengthened legislation through the Sexual Offences Act which gives our prosecutors greater tools in their armoury to prosecute the individuals responsible and bring them to justice. However, any instance of rape is one too many. Progress is being made, but it is vital we continue working to raise awareness and change attitudes, through this campaign and other means, to stop rape from happening in the first place."

Sandy Brindley, National Coordinator for Rape Crisis Scotland said: “Rape Crisis Scotland is very supportive of the new campaign. The law is clear - sex without consent is rape. The biggest hurdle we face is changing people's attitudes towards rape. We need to make sure the Scottish public understand what rape actually is. The 'We Can Stop It' campaign speaks directly to men and offers something very positive - that rape is preventable, and men can play a positive role in making this happen.”