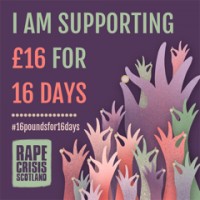 New figures show on a typical day in Scotland 1035 survivors of sexual violence were waiting to access ‘life-saving’ rape crisis support. This has almost doubled from last year, where a snapshot showed this figure stood at 582. In light of this news, Rape Crisis Scotland have today (Monday 25th November) launched their biggest ever Crowdfunding campaign.

Backed by Everyday Sexism’s Laura Bates, the charity argues that ‘no survivor should ever have to wait to access lifesaving support’ as it makes a public appeal to mark the annual international 16 Days of Action campaign against Gender Based Violence.

16 pounds for 16 days calls on the public to stand against rape and sexual violence by donating or raising a minimum of £16 pounds through challenges, sponsorship, or workplace/community events. All money raised will go straight into supporting survivors of sexual violence through local rape crisis centres and the national helpline.

Already supporters have signed up to undertake an epic sponsored silence, a bracing sea swim and office coffee morning in what promises to be an action packed 16 days.

Survivors from across Scotland have spoken out about the devastating impact of not being able to access timely specialist support on their mental health and ability to get on with their lives. Whilst it made some survivors question their decision to seek support and whether they were deserving of it, another survivor who responded to a survey from Rape Crisis Scotland, said

“I was a mess felt like I couldn’t start healing. No-one to talk to all going on in my head. I was self-harming, suicide attempts. I felt isolated and my head was exploding”

“Sexual violence is traumatic, and too often after making the incredibly difficult decision to ask for help survivors are told that they must wait.

“Let’s be clear; we don’t believe that any survivor should ever have to wait for life saving support.

“The broader conversation about sustainable funding for local centres is ongoing, but right now we are asking for the public to get involved with 16 pounds for 16 days and donate to support survivors of sexual violence and ease the pressure on local Rape Crisis services.

“We know it’s a big ask, but we wouldn’t be asking it if it wasn’t important.”

"The chronic under-funding of our frontline sexual violence services ought to be a source of national shame. I have seen first hand the life changing, vital impact of our rape crisis centres. No survivor should have to wait months or years to access the help they deserve. I urge everybody to support this campaign this 16 Days of Action."

1) The link to the Crowdfunder can be found here.

3) All money raised through the Crowdfunder will be divided evenly amongst the 17 centres and national helpline.

4) Further quotes from survivors about the impact of waiting are available on request.