Skip to menu Skip to content
Home Web safety Accessibility Find a service near you
Support us Members’ area
Click here or press the Escape key to leave this site now
08088 01 03 02
Phone the free Rape Crisis Scotland Helpline
Every day, 6pm to midnight
Home|Blog|Patriarchy To Pandemic: Four Decades Of Rape Crisis In Scotland

Patriarchy To Pandemic: Four Decades Of Rape Crisis In Scotland

Survivors of sexual violence and the workers who support them are no strangers to adversity.

The roots of Rape Crisis in Scotland sprang out of a determination to overcome the worst of human experience, and this most adaptable and resilient of movements has known many challenges over the four decades and more of its existence. The current pandemic is in many ways simply the latest in a very (very) long line of large-scale barriers faced by Rape Crisis services, and the pragmatism, positivity and refusal to bow to circumstance so clear in the arrangements introduced so swiftly this year by centres and the national office to minimise its impact on people looking for support (and maximise their opportunities to access this) echo some of the earliest impulses of our movement.

If the past year has offered any positives at all, one of them is certainly an opportunity for reflection. And in many respects, what this reveals is that in order to find our way forward it can help to look back. In the darkest days of 2020 it can make such a difference too, to remind ourselves just how far we’ve come. In the voices of the sisters who went before us, there is much that resonates with our own experiences, and the challenges we face in work that can change lives for the better – and sometimes even save them.

The importance of those voices, and what they can teach us was why, over a decade ago, we undertook the first phase of an oral history project: to document the reminiscences of many of the women involved in setting up the very first rape crisis centres in Scotland. This first phase spanned the period 1976-91: 15 years of women in Scotland listening to survivors and shaping services to help them cope and heal, and to challenge systemic and societal failures to respond to them appropriately, or offer access to the justice that was their right.

From their earliest efforts, Rape Crisis workers in Scotland, and their project to reach survivors and to make the kind of 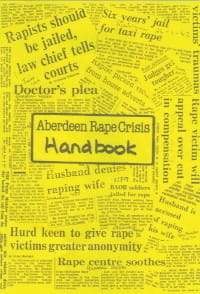 difference they so desperately needed faced obstacles and opposition. The barren landscape in which these pioneers hoped to build lasting change both within individual lives and across society was characterised by a chronic lack of resources, and widespread ignorance about the realities of sexual violence. Seated in a deeply sexist and male dominated culture, and confronted with stigma and prejudice, a hostile and often complicit media and an antiquated justice system, the context was far from hospitable. Dragging sexual violence out of the shadows and into public consciousness was not for the faint-hearted – but the impact made by the women in Scotland who took the decision to take it on, was life-changing. And that was the point. Given the chance to speak about the unspeakable – to communicate, very often for the first time, what had happened, was the key for many survivors to beginning to heal:

“I think it was the opportunity to talk. It was non judgemental. Nobody was saying it was your fault. Letting them know that it happened to lots of women, that they weren’t the only ones. Letting them know that it wasn’t their fault that it had happened…because quite often it was somebody they knew… And I think sometimes because they’d been so shocked by what had happened they wanted you to be shocked as well and the fact you weren’t and you said ‘yes, these things happen, you’re not the only one’, then it helped in some way to feel ‘yeah well it does happen to other people, I didn’t do it.’…The fact maybe they didn’t fight somebody off. You can explain how fear, some people go totally rigid and… they just can’t do anything. And to understand that because it may have happened to them…That that was ok to do that, it was ok to fight back, it was ok not to…” [Sheila Brodie - in Woman to Woman: an oral history of Rape Crisis in Scotland, 1976-91]

The earliest efforts to support survivors were very much ‘hand-knitted’ - improvised ‘survivor-led’ encounters – (in the sense that the support was non-directive, as survivors themselves – then as now – were considered the experts in what they needed to help them heal). From stations to ‘multis’, meetings took place in many different locations, in an era where the concept of ‘risk assessment’ was unknown. With rape crisis work and feminism in general regarded by many with suspicion and even hostility, the location of centres was kept confidential. And workers sometimes took great personal risks and used their ingenuity in order to meet those who needed their support:

‘We met women in railway stations, we met them in pubs, cafés, we had favourite cafes that were quite useful – we had a list of places that were useful…this place was quite good ‘cause, you know, the tables were far enough apart but it was busy and there was music on and you could have a quiet conversation and you could drink one cup of coffee for two hours and the waitress wouldn’t bother you.” [Lily Greenan – in Woman to Woman: an oral history of Rape Crisis in Scotland, 1976-91]
The distance between tables is an issue for all of us these days, while Zoom and Skype have replaced in-person support sessions for the time being. But the willingness to improvise – to adapt and ensure that survivors remain at the centre of our work, and that we maximise their access to support – is exactly the same. Rape Crisis support these days has come a long way from the telephone in a cupboard and anonymous meetings in cafes are now a thing of the past. We’ve still a long way to go, but improvements in resourcing and a wider understanding of the reality of sexual violence have allowed us to build on the strong foundations laid out by our sisters, and to extend the impact of our work to help survivors to get the support they deserve.

Our efforts to preserve our history continue, with a second phase of our Oral History now underway.
Were you involved with the work of Rape Crisis in Scotland at any point between 1991 and 2003? Perhaps you volunteered or joined one of the collectives?
Whether you’re in Dingwall or Dundee, Kirkcaldy, Kilmarnock or anywhere else in Scotland – if you’d like to take part, and share your memories of involvement with Rape Crisis, we’d love to hear from you.