Major issues remain with forensic responses to rape in Scotland

A new report released today by HM Inspectorate of Constabulary in

Scotland found that while some progress has been made, there has been little difference in the actual experience of rape survivors since the last report, issued in March 2017, which found that services were unacceptable. 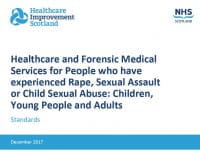