Skip to menu Skip to content
Home Web safety Accessibility Find a service near you
Support us Members’ area
Click here or press the Escape key to leave this site now
08088 01 03 02
Phone the free Rape Crisis Scotland Helpline
Every day, 6pm to midnight
Subscribe to our newsletter
Home|News|New campaign to end the not proven verdict

New campaign to end the not proven verdict

Rape Crisis Scotland and Miss M, the woman at the centre of a recent civil rape 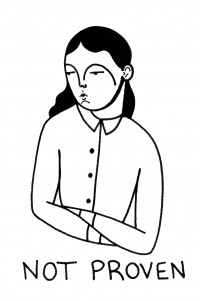 case, are today launching a campaign to end the not proven verdict.

Following a not proven verdict in a criminal trial in 2015, Miss M successfully sued Stephen Coxen in the civil courts, in what was the first civil damages action for rape following an unsuccessful criminal prosecution in almost 100 years.

· The not proven verdict is used disproportionately in rape cases. In 2016/17, only 39% of rape and attempted rape cases resulted in convictions, the lowest rate for any type of crime. Nearly 30% of acquittals were not proven, compared with 17% for all crimes and offences.

· There is some evidence[1] that juries can be reluctant to convict in rape cases, and that preconceived notions of how someone should react to rape may impact on their decision making. There are real worries that the existence of the not proven verdict gives juries in rape trials an easy out and contributes to the guilty men walking free

“I am Miss M.I am the woman who was raped by Stephen Coxen in 2013 and who has finally received justice after a long, complicated and difficult journey through the criminal and civil justice system. But it is not justice that motivated me to start this campaign to end the not proven verdict in Scotland, it was injustice.

Scotland is the only European nation to have a third verdict in criminal cases, ‘not proven’. The certainty we apply to guilty and not guilty does not apply to not proven. Clouded with ambiguity, some think not proven means that the sheriff or jury believe the accused is guilty, but don’t have enough evidence, and others aren’t so sure. It goes without saying that this uncertainty exists amongst juries as the general population, the very people who must make a decision and uphold the law. Nevertheless, the legal implications of not proven are the same as not guilty and the accused is acquitted and innocent in the eyes of the law. In amongst the uncertainty what we know for sure is that not proven is most commonly used in cases of rape and sexual violence.

I fear - as someone who received a not proven verdict and spent three long years fighting the Scottish legal system subsequently - is that the not proven verdict means that those who are raped are unfairly left without justice and those who rape face no consequence, no sanction for their actions. What message does this send to society?

Reporting rape is never going to be easy, but I shouldn’t have had to fight against the justice system in my pursuit for fairness. It didn’t have to be this difficult.

I am calling on the Scottish Government to give survivors a chance. There is no convincing argument to retain the outdated verdict, it’s time to scrap not proven for good.”

“The conviction rape for rape & attempted rape is lower than for any other crime. The not proven verdict is used disproportionately in these cases. Many rape complainers tell of how devastating it has been to get this verdict, after going through the ordeal of giving evidence in a criminal trial. We have a real concern that this verdict may be contributing to guilty men walking free following being tried for rape. Alongside Miss M, we are calling for an end to this verdict and a move to a two verdict system of guilty and not guilty.”