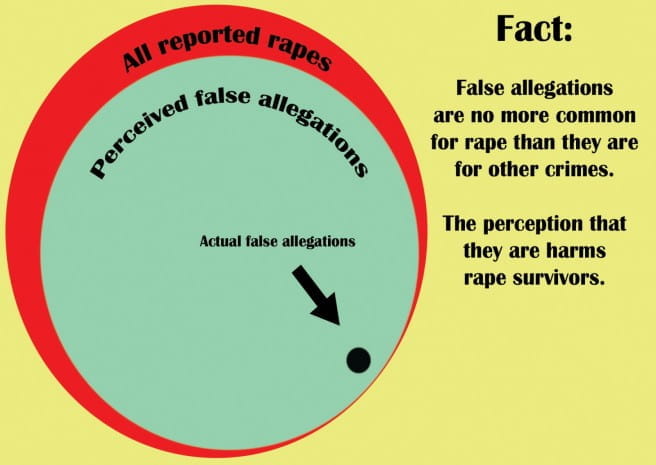 It is a common misconception that false allegations of rape are common, yet the suggestion that survivors frequently claim they have been raped when they have not is repeated time and again in the course of discussions around rape.

In particular, demands that men accused of rape and sexual offences should be entitled to the same anonymity as complainers are linked with claims that allegations of this kind are often spurious and false, and that women’s accounts of their experiences of sexual violence should be treated with scepticism.

These ideas have sometimes been amplified by individual police officers, by the men’s rights movement, and by popular culture, where references to women ‘crying rape’ have gained much credence in recent years – and done a great deal of damage. There is no research basis for these assumptions, though their grip within popular discourse on sexual violence is in some quarters considerable, as is the resultant damage to survivors and their chances of obtaining justice. It is a scepticism which has no equivalent in any other crime type, and research undertaken in recent years has revealed that false complaints are no more common in cases of rape than they are for other crimes. The truth is that false allegations of rape occur with no more frequency than they do for other crimes, and in order to gain a full understanding of the facts, we must look at cases in detail – and ask the right questions.

What do we mean by false reporting?

Statistics purporting to record false allegations of rape often include cases which were ‘no crimed’. This conflation pushes up the figure for false allegations, skewing the picture significantly. The grounds under which a case may be ‘no-crimed’ do include false allegations, but there are other and complex factors which may also lead to this designation, and it is important that these are applied consistently. In some cases which are ‘no crimed’ no evidence was found of assault, often following a period of complete incapacity (for example through drink or drugs) on the part of the alleged victim, the initial suspicion either having been raised by them or by someone else on their behalf. A suspicion that something may have taken place is not the same thing as a false allegation, and the discovery to the contrary can be a cause of real relief among those raising that suspicion with the police. In Scotland, guidelines state that a crime must remain recorded (i.e. cannot be ‘no-crimed’) “unless there is credible evidence to disprove that a crime had occurred”.

In many cases, the decision to classify a case as a ‘false allegation’ is taken solely by the police, and research has shown that other factors such as mental health, alcohol and drugs, and previous allegations have often played a significant role in this decision. Again, assumptions made about the credibility of complainers very much feed into this process; it is not only in court that prejudicial attitudes can militate against survivors seeking justice for rape – these attitudes can also prevent them from getting there in the first place.

It is also vital to make a distinction between false allegations and retractions. Women do sometimes retract allegations of rape, but there can be many different reasons for doing so, and it should never be read as an admission that the allegation was false. It is just as possible that this has come about because of fear of or a lack of confidence in the justice process – or fear of the alleged perpetrator, as in the case of the Powys woman who was jailed in 2010 after retracting an allegation of rape by her husband. The appeal judge in this case commented:

“The difference between the culpability of the individual who instigates a false complaint against an innocent man and the complainant who retracts a truthful allegation against a guilty man will often be very marked.” Even among the tiny number of complaints which those who make them later confess to be false, the context sometimes reveals them to have been made out of utter desperation, as in the example cited in Kelly’s research of a young Asian woman trying to avoid being taken to Pakistan for an arranged marriage.

What is the reality?

An extensive study into rape case attrition undertaken by Kelly et al in 2005 concluded that the figure of 8% (of 2264 cases studied over a 2-year period) designated ‘false allegations’ was not in fact accurate. Instead, when the cases deemed to be ’false allegations’ were analysed in detail, and Home Office guidelines on classifying them as such correctly applied (allowing only those cases which could be coded ‘probable’ and ‘possible’ to be included in the final figure, and excluding those - where the decision had been based on the victim’s perceived credibility which were ‘uncertain’) 3% emerged as the correct figure.

A study produced by the Crown Prosecution Service in England & Wales in March 2013 revealed that over a 17-month period between January 2011 and May 2012 – when all false allegation cases were referred to the DPP – there were 5,651 prosecutions for rape, but only 35 for making false allegations of rape.

As Stephen House, Chief Constable of Police Scotland explains:
“From a police perspective there is nothing to suggest either anecdotally or evidentially, that false reporting of rape is prevalent, in fact such cases are very rare. We recognise that there are many reasons why a victim would subsequently withdraw from the criminal justice process and we are trying to get a better understanding of why that is and what we can do to improve confidence in the system. What we do know however is that of those rape cases that we later reclassify as no crime, only a very small proportion of those are as a result of a false report, so few in fact that ordinarily the statistics would merit no further debate”.

In Scotland, all rape reports marked ‘no crime’ are now reviewed by the National Rape Task Force Rape Review Team.

What are the consequences?

The perception that large numbers of allegations of rape are false is very damaging to women, and to survivors of rape in particular. It reinforces prejudicial attitudes to complainers – for whom the barriers to justice are already considerable, with women already scrutinized and judged on many irrelevant factors (dress, flirting, alcohol consumption etc) – even when an allegation is taken seriously. It is the evidence, not the complainer, which must be tested and examined. But popular myths that women cannot be trusted perpetuate a relentless focus on their motives, sexual history, demeanour, credibility and behaviour, leaving perpetrators able to remain unchallenged by comparison, in relative obscurity. In some cases, this has allowed serial offenders (as in the cases of John Worboys and Kirk Reid) to act with total impunity and continue attacking women, sometimes for many years, as a result of doubt being cast on the words of their victims.

The principle that an accused man is innocent until proven guilty should not mean that women should be presumed in many cases to be liars. The low level of reporting among rape victims is already to a large degree attributable to a fear among many that they will not be believed – and a grossly exaggerated perception of the extent to which false allegations of rape occur only makes this worse, exacerbating the fear many women considering reporting experience, that they will not be believed if they do. Conversely, there is no evidence that large numbers of men are being falsely accused of rape.

What can be done?

»» Detailed, comprehensive and consistent case-tracking to monitor the progress of all sexual offence cases

You can download this campaign briefing paper as a pdf here and the accompanying postcard here. These documents are also available in hard copy format - if you would like to receive these, please email info@rapecrisisscotland.org.uk.

2. Rape investigations ‘undermined by the belief that false allegations are rife’

3. False allegations of rape and domestic violence are few and far between

10. Third of dropped rape cases should have been pursued, says report