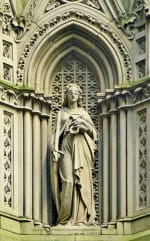 We were shocked and horrified to see the use of such blatantly prejudicial sexual history evidence in the Ched Evans retrial.

Like Scotland, England and Wales has legislation in place to restrict defence lawyers using evidence of a rape complainer's sexual history; however as with Scotland, the English/Welsh legislation does not ban the use of this type of evidence. Judges have the power to make exceptions to these restrictions to allow sexual history evidence to be used. In this case, the judge allowed evidence to be led from two men about sexual relations with the complainer before and after the alleged rape by Ched Evans. Sexual history evidence with someone other than the accused would normally be unlikely to be admitted but in this case the justification appears to be that the complainer had allegedly used similar language with both these men during sex - "fuck me harder" - as Ched Evans claims she did during the rape he had been convicted of. Neither of the initial statements of these two men mentioned these supposed similarities, which only appeared in subsequent statements following Ched Evan's conviction and the offer of a £50,000 reward for information by Evan's team.

It is unimaginable what this experience was like for the complainer in the case. And unsurprisingly, it worked. The jury acquitted. The introduction of this 'evidence' was the key difference between the first trial where Ched Evans was convicted, and the retrial where he was acquitted. Defence lawyers use sexual evidence because they know it works.

We have long had very strong concerns about the use of sexual history or sexual character evidence being used to discredit rape complainers. This kind of evidence draws on pervasive and outmoded rape myths and is often designed to undermine and challenge the credibility of a complainer by suggesting she is the 'type of woman' who is promiscuous, has different sexual partners and is 'up for sex' indiscriminately. It can be used to cast doubts on the truthfulness of her account and, crucially raise doubt about her lack of consent. It diverts attention away from important issues in the trial such as the question of the guilt or otherwise of the accused by focusing on past sexual behaviour of the complainer. Like Scotland and England/Wales, many other legal jurisdictions around the world recognise this problematic potential of sexual history evidence and have introduced restrictions around its use - but no jurisdiction imposes a total ban. The use of sexual history evidence with someone other than the accused is considered particularly problematic, with concerns about the probative value of this kind of evidence and its high potential for diverting the jury from key issues in the trial.

In Scotland we have had 'rape shield' legislation since the late 1980s which was introduced partly to address a concern with under reporting by those who experienced rape. But, following research[1] which showed it was ineffective in restricting such evidence, the rules of admissibility were tightened in 2002. At the same time, these restrictions were applied to both the defence and the prosecution. Both must now apply to the court in writing for permission to introduce such evidence and specify the grounds and reasons why they wish to do so. The judge must determine the relevance and admissibility of the questions or evidence. The judge can allow the evidence in full or in part if it is considered admissible to establish guilt of accused. The Scottish legislation requires judges to balance the potential relevance of any sexual history evidence with the risk of prejudice, and this includes the protection of the dignity of the complainer. The law in Scotland therefore has the potential to provide strong protection from unnecessary intrusive and degrading questioning. The key question is whether it is working …….
Research on the 2002 legislation published in 2007[2], found that such evidence was still being used in sexual offence trials with some frequency. It also found that even where restrictions on the requested questioning had been placed by the court, it was still being asked and sexual history and/ or character evidence was a strong feature of the majority of trials.

That research is now 10 years old and since then we have seen further developments including the introduction of a new definition of rape and sexual assault as well as a definition of consent in Scotland . But we do not have a clear picture of the current situation. Individual women going through the criminal justice system report they are being asked questions about their sexual history and character but unless more systematic research is undertaken we cannot investigate this more fully. Following concern about the use of complainers' medical records in rape and abuse trials, the Scottish Government undertook a data counting exercise in the first 3 months of 2016. They found that during this period there were 57 applications to lead sexual history or character evidence in trials in Scottish courts. 51 of these applications were unopposed. 43 were granted in full, and 5 in part. On the face of it, the very low level of opposition to these applications, and their high success rate, is worrying, but we need proper research to analyse what type of applications are being made and approved. We need to know whether or not the law is protecting rape complainers in the way the Scottish Parliament intended when they passed the legislation.

The Ched Evans case has highlighted that outdated notions about women's sexuality are still being played out in courtrooms across the UK. Women regularly tell Rape Crisis that they do not want to report their rape because of fear that their personal lives will be exposed in court. If women are to have any confidence about their ability to access justice following rape, this needs to change. Urgently.

Image by Tim Green from Flickr reproduced under Creative Commons